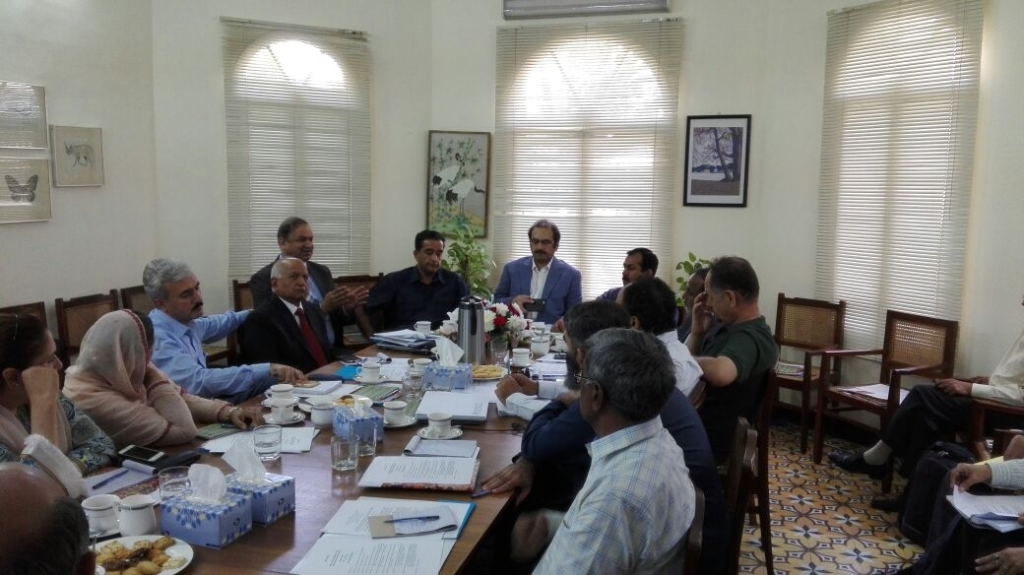 A meeting of the IUCN Pakistan Members’ National Committee was held at its Country Office on October 24, 2017. The meeting was chaired by Mr. Amjad Rashid, CEO, Taraqee Foundation. The Pakistan Committee of IUCN Pakistan Members is composed of the Ministry of the Climate Change, Six Government Agencies and 35 Non-Governmental Organizations.

The Pakistan National Committee discussed a wide variety of issues which included a loss of biodiversity due to deforestation in the country; impact of the industrialisation on the ecology, and impacts of the mega projects on environment. The NGO members unanimously agreed to form a body composed of the Public and Private organizations to act as a monitoring body to ascertain the environment based on the facts and figures and to interact with the concerned authorities to find effective solutions.

Some Members also opined about the need to closely work with Chinese and Pakistani governments on the CPEC corridor to ensure full implementation of the EIAs, creation of a green belt and conservation of ecological systems along the corridor. Since the project has its own system in place, we only need to ensure that it works properly.

In the opening remarks, Mr. Mahmood Akhtar Cheema, Country Representative, IUCN Pakistan welcomed all the participants. He appreciated the role of IUCN Members and their contribution towards conservation of natural resources in the country. He said that Pakistan has the largest number of IUCN Members in Asia. He also lauded the role of Pakistan Navy in mangroves plantation and its protection along the coastal areas. Mr. Cheema also informed that IUCN is facilitating a process between Chinese and Pakistan governments at a policy level to ensure that the conservation remains high on the agenda in this mega development process. He said that response from the higher level officials from both sides was very positive towards incorporating environmental concerns in the CPEC. He stressed on the need to promote public private partnerships to effectively contribute to achieve the sustainable development goals.

Mr. Amjad Rashid, Chairperson, Pakistan National Committee of the IUCN Members welcomed the IUCN Members for participating in the meeting. He appreciated the role of IUCN Secretariat in bringing together the concerned organizations so as to discuss and debate on emerging environmental issues. He also stressed on the need to strengthening partnership with other member organizations in Asia for regional level initiatives to mitigate the impacts of Climate Change.

Mr. Malik Amin Aslam, IUCN global Vice President and Regional Councillor Asia briefed the Members on the global trends towards conservation and efforts for mitigating the impacts of Climate Change. He said that 2015 was an apex year in view of the Paris Climate Agreement, but the disaster struck when the US government walked out of the agreement, it was a big blow to the environmental movement. A few countries took a serious stance on Climate Change, of which two are worth mentioning i.e. Government of China and France. The Chinese government is spending trillions of dollars in the next 5 years. Their entire policy pattern has shifted which is based on the concept of Eco-civilization and its objectives are laid out very clearly.  IUCN is involved with both China and France. France has started an initiative called Global Pact for the Environment. Both these countries are emerging as world leaders in environment and are trying to fill the vacuum created by the United States. He mentioned that Mangroves for the Future Programme is highly admired at the world level as a model programme which needs to be replicated in the other regions of the world.

Mr. Naeem Ashraf Raja, Director Biodiversity, Ministry of Climate Change strongly proposed a Red List of species at the Country Level. He was of the view that by the time the specie is reported it already reaches to the next category of red listing. He suggested that it is imperative to have a National Red List so that proper measures are taken at the right time.

Mr. Tahir Rashid, CEO of the South Punjab Forest Company made a detailed presentation on the potential of the commercial forestry in Southern Punjab. He said that under this programme local species of trees are being introduced. He further said that the project has a potential to turn a wasteland into a very productive forest that can contribute billions of rupees to the exchequer.

Ms. Meher Marker Noshirwani, Technical Advisor of Trust for Conservation of Coastal Resources made a presentation on IUCN Commission on Environmental, Economic and Social Policy activities. She focused on the realisation of a human rights-based approach to conservation. She emphasised on exploring points of collaboration at the regional level on gender issues and entry points into gender networks and international processes on women’s issues.

Mr. Ghulam Mustafa Zaor, Chief Services Executive, HANDS made a presentation on Disaster Risk Reduction. He informed that under their Climate Smart Programming they are setting up wetland ecological treatment systems that effectively eradicate faecal chloroforms and harmful bacteria present in human sewage. He mentioned that HANDS has supported over 100,000 families in building low cost flood-resistant shelters. HANDS’s emergency response work started with Flood Emergency in 2010 in Sindh and now has spanned to other counties i.e. Nepal during Earthquake in 2015 and Syrian Refugees Crisis in Turkey in the year 2016-2017.